"Doug DePew's sense of humor shines in this memoir. He had me laughing at many of the antics. I enjoyed reading DePew's story. It is well-written and the style is  conversational. I could imagine sitting with him and listening to him
reminisce. DePew wrote this book in honor of his fellow soldiers. Let them not be forgotten."
~~Reader's Favorite

DePew and his buddies were hard drinking, brawling, fraulein-chasing, pranksters who, when duty called, seriously guarded the warheads and missiles from Soviet and peacenick attacks. Men who bonded and always had each others back. I appreciated DePews' story and will keep the book on my shelf."
~~Lee Boyland, Military Writer's Society of America

"I think anyone who served in Europe would like this book, especially those who served during that era. Anyone interested in modern military history or the cold war as well. The book is a no holds, funny, irrevrent look at a young man coming-of-age, reminiscent of some of the great satirical war novels with the twist that it's all true!

In the fall of 1987 Doug was in the towers with two of his first C 2/4 roomates. SPC Joe Alvarez was short, it was his last tour. Joe had a bitter outlook on his C 2/4 experience and always stated he didn't want to be one of those 'loser veterans' who wax nostalgic about their army time. "Look out there" Joe said, pointing to the woodline, "4,000 miles away people in America are going to their 9-5 job, people are sleeping, eating, doing whatever; They have no idea about 2/4, the towers, they don't know what we  do, they don't care, no one knows or cares." I don't know who else was in that  relief, but I was the other of Doug's roommates there. With Doug's book I hope  that at least some people may finally know and have some understanding of what  we did. 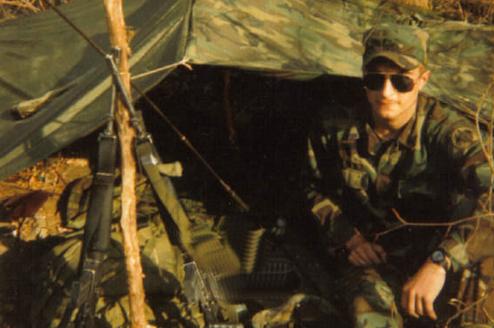 "Recall!" happened largely because people kept requesting a follow-up book. I still had stories to tell, so it just flowed. This was the other historic event I participated in, and it's also a pretty unique experience. It's a shorter book, but surprised even me with how well it pulled together. It tells about my experiences being recalled to active duty for Operation Desert Storm.

It's quite possible that a third book will follow at some point covering the Fort Carson years in the middle. That's still undecided, but I have good stories from there, too. In any event, I hope you enjoy these books.

Every Soldier, sailor, airman, or marine has a story to tell

"DePew relates his own story and experience as one of the thousands called up to serve on active duty. DePew relates his experience in a lighthearted way; this is a great book for those who have no close family in the military while proving of interest to those that have served."
~~Jim Greenwald, Military Writer's Society of America (2012)

"This book is a fascinating glimpse into the life of an ex-military man who is recalled to service when war once again threatens to erupt. We see the total disruption to the life he'd been building. Then we travel with him to his new military base and feel the instant camaraderie between these men who'd been pulled back from their civilian lives. This is an interesting read for those with military background, or for anyone who'd like to understand what it's like for these men and women who put their lives on the line for us each and every day."
~~Darcia Helle

"I really enjoyed Recall!, a book about the Individual Ready Reserve (IRR), its limited activation during Desert Shield and its affect on the author. Before reading DePew's book I thought I had read about just about everything there was to know about Desert Storm but I was wrong. I strongly recommend Recall!"
~~James D. Crabtree

"This book is a fascinating journey from the high jinks of life in a Florida music studio college, to reunion with the reality and rigors of life on 'Army Time', with an assortment of not so happy recalled veterans and the adjustment and metamorphosis back into the physical, mental and emotional state and unit cohesion of a fighting unit ready for combat. Often funny, sometimes profane, but thoroughly captivating.

"Recall! Return of the IRR is a well-written account of a very unique military experience. Author Doug DePew describes being ordered back to active duty in support of Operation Desert Storm in vivid detail.

The story is communicated in a manner that is easily understood by civilians. While acronyms are endemic to the  language of the military, DePew steers us through this potential hazard like an  experienced tour guide driving through a dense forest. Strong editing helped  tremendously in this regard. If you're looking for a military memoir that  delivers from start to finish, don't miss this book."
~~Robert J. McDonnell

My mother always said there's a book inside every soldier's head. My time in the military was pretty typical. I joined right out of high school and attended Infantry OSUT at Fort Benning, Georgia. Then I was sent to West Germany like a large percentage of new soldiers in the 1980s. I did two years in Germany then finished up my four years at Fort Carson, Colorado with the 4th Infantry Division. I was nothing special...just one of millions. After I got out, people loved my stories. We lived an interesting life. Many people told me to publish a book and they'd buy it. I went to college, got married, had several careers, but that book was still bouncing around in my head. People loved my stories.

I always knew I wanted to write a book about our time in Germany. The experience was too unique not to. Organizing it all was the hard part. One day, it hit me. I wrote some notes on a little, yellow, sticky note and wrote from there. Once it started falling into place, it was extremely fast. All night sessions of writing and editing were the norm until the story was down. I had to tell it for the men who were beside me and for the millions of men and women who also took part in winning the Cold War. Our story was quickly being forgotten. I wanted to make sure that at least my little part in it was recorded for my children and grandchildren. What we did mattered. It was time for the world to know.

This is the result

This is my flagship book. Written in 2011 on the twentieth anniversary of the end of the Cold War, this book was my way of sharing with the world what we did. I provided security for Pershing II nuclear missiles in the 1980s...just one of millions. As a history teacher, it struck me that nearly nobody had any idea what we did. This story was my way of sharing that with the world for all of us. This book has been housed in the permanent collections of: Pritzker Military Library, The Cold War Museum, and the US Army History Museum.

Recall! Return of the IRR

How Many People Visit

"This book is today's non-fiction equivalent of Joseph Heller's Catch-22. This book was definitely written from a guy's perspective,  but I think it crosses the gender divide."
~~Java Davis, The Kindle Book Review

"His experience during a time in American history few really know of will inform you and make you rethink the cold war. He had only been on earth for 18 years when he became a tower rat and reading Doug Depew's rendition of the trouble he and his beloved friends got into, I wasn't sure which mission was more dangerous, his outings in Germany or his tower responsibilities as a soldier.

Seeing it all from a mother's vantage point, it was hard not to worry about him, and yet harder not to crack up laughing at some of his escapades with the daily threat of death hovering over that tower. When he boarded that 747 for the last time, I exhaled."
~~Joanne V. Mozzatta